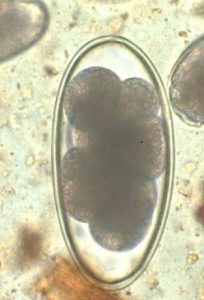 Spring is not only a time for colorful eggs filling Easter baskets, but it’s also the perfect time to have your horse’s manure checked for a less attractive sort of egg. So what is a Fecal Egg Count (FEC) and what does it tell us anyway? A FEC is a quantitative test that looks for worm eggs, in this case usually strongyles, and the result is expressed in a number of eggs per gram (EPG) of manure. A specific amount of special flotation solution is mixed with a specific amount of manure. The solution is drawn up into a syringe or pipette and placed in a special microscope slide that contains two grids. The eggs in each grid are then counted and a mathematical formula is used to determine the EPG of the sample. Though strongyle eggs are the ones being counted, other parasite eggs may also be seen and noted if present. From this information it is determined what type of shedder the horse is.

If you have never had a FEC done on your horse before, or it is a new horse being added to the herd, it is a good idea to run a second FEC two weeks after deworming. The FEC should be decreased at least 90% and if it’s not, there may be some resistance to the dewormer that was used.

Other forms of management on the farm can go a long way as well. Rotating pastures, picking up manure, harrowing fields, not overstocking, and deworming new animals prior to turning them out with the herd can all decrease the parasite load in pastures. It is also important to eliminate tapeworms annually. They will not show up on the routine fecal float. The best time to do this is in the late fall, after a frost. You should use a dewormer that contains praziquantel.

The best time for us to check your horse’s manure this spring is before you de-worm them! Catching a sample approximately three months after the last deworming will yield the most accurate information on your horse’s shedding level. Now that you are armed with a little more information on the how’s and why’s of deworming, feel free to fetch a sample (the fresher the better) of your horse’s manure and have us run a fecal egg count to see where your horse stands this spring. Leave the egg hunting to us and we will help you tailor a deworming schedule appropriate for your horse!